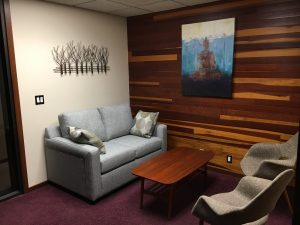 So this has been a tough few weeks, with little end in sight. Despite this, or maybe because of it, I thought I’d share something exciting from my life.

A few weeks ago, I made a bit of a bold move, and for the first time, rented office space. The Inland Northwest Compassionate Mind Center is no longer just an idea, or a set of activities. It is a place.

I know this will sound amateurish to those of you with lavish offices, but for me, it felt important. While I’ve done therapy continuously since becoming a psychologist, this is the first time I’ve had my own space, and the first time in my life I’ve been able to build a therapeutic space from the ground up. Before now, I’ve either done my clinical work within the confines of other agencies (university counseling center, prison, residential facilities, schools) or sub-let office space at a per-hour rate to accommodate my small private practice, with no chance to create a space of my own. Even my cozy professor’s office at the university is filled with hand-me-down furniture from faculty who retired as I arrived, and the clutter endemic to academic offices. I’ve sometimes arrogantly joked that all I needed to do therapy was two chairs and a reasonable source of light…a joke that made light of the fact that a good bit of the time, that’s about all I had.

But it seemed time to take the step, and the process of creating this space has soothed me during tough times. Those of you who know a bit about CFT know we group emotions generally into 3 systems: threat, drive, and safeness. While I haven’t had the chance to write about it yet, I’ve long believed and built my therapy and teaching around the idea that an optimal learning and growth environment involves healthy doses of safeness and inspiration (drive) (and there’s research that speaks to this, using different language). No need to purposefully add any threat to the mix – growth and learning, particularly in therapy, tend to carry that with them.

So in building this space, I looked to create safeness and inspiration for myself, my clients, and my supervisees. I wanted a varied palette of colors, containing both synchrony and some chaos, in which any attire would fit if not match. I wanted warmth. I wanted something of simplicity in a manner that would feel familiar to my Danish friends.

And finally, I wanted some symbolism subtly embedded within the space – to inspire me whenever I enter it, to remind me of my purpose for being here, that this is a place of healing. The first symbol I chose was kintsugi – the Japanese art of mending broken pottery with seams of gold, to represent that in healing our broken places, we can become even more beautiful than before. I placed a print of a relatively local artist’s rendering of a kintsugi bowl on the wall, and scattered a few mended bowls about the office, some prominently placed, some subtly.

The therapy room was coming together nicely, but there was still a big wall-space behind the couch upon which my clients would sit. It needed something.

A number of years ago I attended a talk at a ‘Frontier Days’ celebration with my Uncle Eddie, in rural Kansas, in the heart of a world filled with the working white folk who years later would do the heavy lifting in electing Donald Trump to the presidency. The talk I attended was about quilts. Specifically, about the ways that slaves had used quilts in the Underground Railroad, hanging out quilts with various patterns and shapes drawn from their African heritage to guide other slaves on their way to freedom – to indicate safe pathways and havens, to warn of danger. For those who are interested, this is documented in a lovely book called ‘Hidden in Plain View: The Secret Story of Quilts and the Underground Railroad” by Jacqueline Tobin and Raymond Dobard.

I was fascinated, and mentioned this to my mother – a master quilter whose hand-stitches are so consistent that people sometimes assume her work is machine-quilted. True to form, she made me a quilt featuring the patterns used and discussed in the book, using civil war reproduction fabrics.

The gift moved me, but the quilt lay folded in my blanket-closet for years, wrapped in plastic so it wouldn’t become soiled. I wanted to hang it, but knew it needed to be displayed in the right sort of place. If anything I own could be called sacred, it is this quilt, featuring the same images that slaves used to help their own navigate their way to liberation. This week, looking at that big space on my office wall, I knew I’d finally found the space. 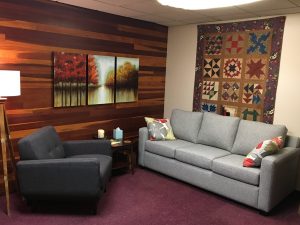 I wondered at it. I wondered if it was too “country,” if it would fit in this space. And then I realized, if it doesn’t fit here, then neither do I. I grew up in rural Oklahoma, and if you know me, you’ve likely heard my accent surface on occasion, like a flavor you might not have expected in an otherwise unremarkable dish. Liberal apologists self-flagellate with claims that progressives didn’t bother to understand the white working class before the election. I didn’t bother, but I understood. It’s in my blood. I’ve played in those all-day softball tournaments on the fourth of July that don’t start until after the turtle-races finish. I’ve gone skinny-dipping in that hidden swimming hole, carefully scanning for cottonmouths before jumping in. I’ve knelt in that red dirt.

So I love this place, filled with two messages, hidden in plain view: First, that we can heal ourselves, and become stronger and more beautiful – not despite the broken places, but because of them. And secondly, that even in the darkest of times, we can join together – with those like us, and those unlike us – to help one another discover the pathway to freedom, one courageous step at a time.

4 Replies to “Hidden in plain view”

Sign up to join our community of compassionate activists. We won’t overwhelm you with spam, and we don’t share your information with anyone.